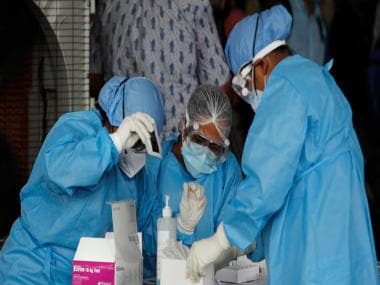 At a time when experts have come forward to encourage more widespread testing, the CDC’s update appears counterintuitive and “very strange.”

The Centers for Disease Control and Prevention quietly modified its coronavirus testing guidelines this week to exclude people who do not have symptoms of COVID-19 — even if they have been recently exposed to the virus.

Experts questioned the revision, pointing to the importance of identifying infections in the small window immediately before the onset of symptoms when many individuals appear to be most contagious.

Models suggest that about half of transmission events can be traced back to individuals still in this pre-symptomatic stage before they start to feel ill — if they ever feel sick at all.

“This is potentially dangerous,” said Dr Krutika Kuppalli, an infectious disease physician in Palo Alto, California. Restricting testing to only people with obvious symptoms of COVID-19 means “you’re not looking for a lot of people who are potential spreaders of disease,” she added. “I feel like this is going to make things worse.”

At a moment when experts have almost universally come forward to encourage more frequent and widespread testing, especially to reach vulnerable and marginalized sectors of the population, the CDC’s update appears counterintuitive and “very strange,” said Susan Butler-Wu, a clinical microbiologist at the Keck School of Medicine of the University of Southern California.

Just weeks ago, the National Institutes of Health announced the first round of grant recipients for its Rapid Acceleration of Diagnostics program, or RADx, to scale up coronavirus testing in the coming weeks and months. On the agency’s RADx website, officials underscore the importance of prioritizing tests that can “detect people who are asymptomatic.”

A more lax approach to testing, experts said, could delay crucial treatments, as well as obscure, or even hasten, the coronavirus’s spread in the community.

“I think it’s bizarre,” said Daniel Larremore, a mathematician and infectious diseases modeler at the University of Colorado Boulder. “Any move right now to reduce levels of testing by changing guidelines is a step in the wrong direction.”

Prior iterations of the CDC’s testing guidelines struck a markedly different tone, explicitly stating that “testing is recommended for all close contacts” of people infected with the coronavirus, regardless of symptoms. The agency also specifically emphasized “the potential for asymptomatic and pre-symptomatic transmission” as an important factor in the spread of the virus.

The newest version, which was posted on Monday, amended the agency’s guidance to say that people who have been in close contact with an infected individual — typically defined as being within 6 feet of a person with the coronavirus and for at least 15 minutes — “do not necessarily need a test” if they do not have symptoms. Exceptions, the agency noted, might be made for “vulnerable” individuals, or if health care providers or state or local public health officials recommend testing.

“Wow, that is a walk-back,” Butler-Wu said. “We’re in the middle of a pandemic, and that’s a really big change.”

Butler-Wu said she was concerned that the guidelines would be misinterpreted as implying that people without symptoms were unable to pass the coronavirus on to others — a falsehood that experts had been trying for months to dispel. “If people are getting exposed, and they’re not getting tested, and they’re not isolating, that’s a huge problem,” Kuppalli said.

By the CDC’s own estimates, roughly 40% of people infected with the coronavirus may never go on to develop symptoms, remaining asymptomatic for the duration of their tenure with the virus. These numbers are tentative — and ironically can’t be confirmed without more testing of people who appear entirely healthy.

Although researchers remain unsure how often asymptomatic people unwittingly transmit the coronavirus, studies have shown that the silently infected can carry the virus in high amounts. The evidence is more clear-cut for pre-symptomatic people, in whom virus levels tend to peak just before illness sets in — a period when these individuals might be mingling with their peers, seeding superspreader events. Notably, experts can’t distinguish asymptomatic people from those who are pre-symptomatic until symptoms do or don’t appear.

David Piegaro, who lives in Trenton, New Jersey, had sought out several tests for the coronavirus in recent months, after events like funerals and those that require travel because of his post in the National Guard. He never experienced symptoms, and his tests have all been negative, bringing him peace of mind, especially because he lives with his parents and grandfather. “I viewed testing as a good thing to do,” he said. “Asymptomatic people could be spreading the virus, so widespread testing seems valuable.”

Tracking asymptomatic cases is also important from the perspective of the infected, Kuppalli said. Less than a year into this pandemic, experts still don’t know the full extent of the long-term consequences of contracting the coronavirus, even if the initial encounter seems benign.

The reasons behind the surprise shift in testing recommendations are unclear. In response to an inquiry from The New York Times, a representative for the CDC directed the questions to the U.S. Department of Health and Human Services. An HHS spokesperson said that asymptomatic testing could still be warranted “when directed by public health leaders or health care providers,” and noted that testing decisions should be “based on individual circumstances and the status of community spread.”

On Twitter, some people speculated that the Trump administration made the change to try to address continuing supply shortages, which have stymied testing efforts in many parts of the country, stretching turnaround times for results to weeks or more. Many institutions and companies performing testing have prioritized people with symptoms in their lineup as a way to expedite the return of results for those most at risk for falling severely ill.

When asked about this, the HHS spokesperson said that the modification was not a response to sputtering supply chains. “Testing capacity has massively expanded, and we are not utilizing the full capacity that we have developed,” the spokesperson said. “We revised the guidance to reflect current evidence and the best public health interventions.”

Poorly timed testing, if conducted infrequently, could lead to false positives or false negatives, mistaking healthy people as infected or vice versa. That’s a potential risk if someone gets tested too soon after being exposed to the coronavirus, Butler-Wu pointed out.

Even so, anyone with a known exposure should quarantine and consider seeking a test, Kuppalli said, adding, “We still need to be careful.”

Jelly Belly and Yeezy got PPP loans. Which other California companies benefited?