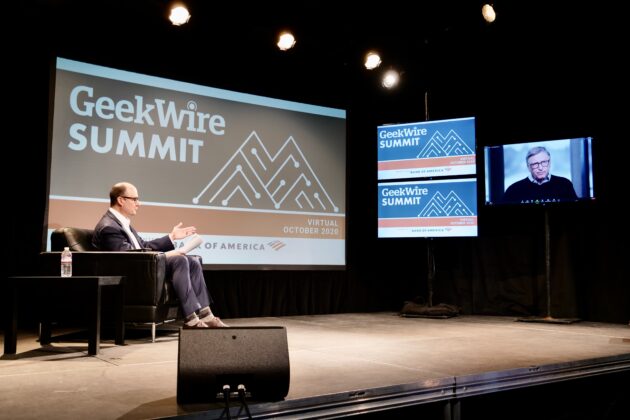 
As COVID-19 began sickening and killing thousands, shutting down the world’s economies and emptying schools, many people belatedly acknowledged Bill Gates’ prescient TED Talk in 2015 that described the threat of a global pandemic and urged countries to prepare. The warning went largely unheeded.

Now he’s sounding the alarm over climate change, with an upcoming book titled, “How to Avoid a Climate Disaster.” And this time, it’s even more important to take action in advance, he said in an interview Thursday at the virtual GeekWire Summit.

“Climate change, in a sense, is worse, because if you mess up, you can’t just go invent a vaccine, and say, ‘Whoops, give us 12 to 18 months and we’ll get back on track.’ With climate change, what you have to change is basically the entire physical economy: transportation, industry, building, electricity,” he said.

He added, “And so starting to invest now, when the current damage from climate change is still fairly modest, is the only way you avoid things that are dramatically worse in terms of the death toll or any measure you take. That’s what climate change will be, as we get into the second half of the century.”

I remain optimistic that it’s still within our reach to avoid the disaster.

With the pandemic, he said, a small number of countries can solve the problem by spearheading efforts to develop a vaccine. But climate is “really a global problem,” he said.

“With climate change, if you have big holdouts, then it doesn’t work,” he said. “There are people who don’t think governments will spend now and make even some degree of sacrifice now to avoid these problems way off in the future. I remain optimistic that it’s still within our reach to avoid the disaster.”

The biggest key, he said, is investment in technology innovation.

“Tech is the only solution. Yes, human behavior can reduce the numbers 10% here, 20% there,” he said. But “without innovation, there’s no way,” he said.

In the hour-long GeekWire Summit interview, Gates shared his ideas about the “green premium,” which is the cost difference between polluting technologies and clean alternatives. For passenger cars, as one example, that premium is shrinking as the price of electric vehicles keeps dropping and can even match the cost of petrol-fueled cars.

But many of the bigger sources of emissions, namely industrial processes such as creating cement and steel, don’t even have viable clean alternatives, Gates said. Those areas are in urgent need of innovation, subsidies and public policies to support R&D.

“We’ve got to do that very soon,” Gates said. “The 2050 goal to get to zero [emissions] would avoid the worst effects [of climate change]. And that gives you 30 years, and say it’s 10 years to design the innovation, and then 20 years to change every steel plant, cement plant, car, aviation, trucks.”

In recent years, the billionaire has ponied up some of his wealth to support these efforts, helping launch Breakthrough Energy Ventures to fund clean startups. The Bill & Melinda Gates Foundation, which he co-chairs, has made climate change a priority area.

He backs ventures including TerraPower, the next-generation nuclear energy venture based in the Seattle area; and Heliogen, a Los Angeles-based startup using computer vision technology to fine-tune large arrays of mirrors, generating solar energy at temperatures hot enough to replace traditional fuels such as coal, gas and oil in industrial facilities.

The Microsoft co-founder also offered reasons to be hopeful. When he gave his pandemic warning, wealthy countries had not been directly touched by an epidemic in the manner that, say Ebola, had stricken some African nations and so were less inclined to act. He also recalled that during the financial crisis of 2008-09, climate became less of a priority as people focused on the economy.

By comparison, COVID-19, despite its tremendous impact, has done little to diminish climate activism, particularly among young people internationally.

“So even though climate’s far harder to solve,” Gates said, “the broad awareness is much, much higher.”

Gates, who has generally steered clear of politics in the past, was critical of the position taken by “one political party” in the U.S. He was frustrated that its members have discouraged the study of climate change or even mentioning it by name.

While Gates avoided identifying Republicans as the party in question, GeekWire editor Todd Bishop asked if he was ready to take a step he has avoided in the past and endorse political candidates. Gates demurred. The data-driven tech and global-health leader called himself “pro expertise,” and said he’s sticking to the topics he knows best.

“I don’t want to become too partisan,” Gates said, but couldn’t help adding, “When expertise gets attacked, when Tony Fauci gets attacked, it at least makes me think, ‘Wow, how did we come to this?’”

[The full interview with Gates, and other GeekWire Summit sessions, are available on-demand exclusively to attendees of the virtual event. Learn more and register here.]

What to expect from Apple’s iPhone 12 event