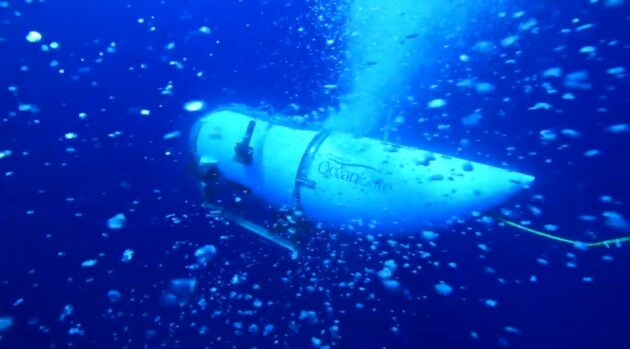 
Everett, Wash.-based OceanGate is getting ready to send explorers down to survey the wreck of the Titanic in its own custom-made submersible, but sometimes coping with the coronavirus pandemic can seem as challenging as diving 12,500 feet beneath the Atlantic Ocean’s surface.

For example, there was the time OceanGate had to retrieve carbon-fiber material that was held up at NASA’s Marshall Space Flight Center in Alabama due to a coronavirus-caused lockdown.

“They had to send a hazmat team into the facility,” OceanGate’s founder and CEO, Stockton Rush, recalled today. “This was in March, and we got our material and our equipment out. I don’t believe NASA is back up and operating even now.”

In hindsight, sending in the hazmat team “was the right thing to do” despite the hassle and expense, Rush said, because that kept OceanGate’s hull fabrication process on track for next summer’s scheduled dives to the Titanic.

Now that process is well underway at Electroimpact and Janicki Industries, two companies north of Seattle that are better-known as aerospace contractors.

Rush said the experience taught him a lesson that other startup CEOs can apply as they cope with the pandemic’s effects: “Being nimble and not waiting is the only way to survive,” he said.

Another lesson has to do with being resilient. Even before the virus hit, OceanGate had to put off its plans for Titanic dives due to technical issues as well as logistical issues relating to U.S.-Canada shipping regulations.

2020 has literally been a rebuilding year for the Titan project: Deep-water tests showed that the submersible’s carbon-composite hull wasn’t as sturdy as it should have been for repeated cycles of pressurization. That’s why a new hull is being fabricated to reach aerospace-grade standards. Several subscale models have gone through testing, and the fiber-winding work for the dive-worthy 5-inch-thick hull is due to begin next week, Rush said.

“That’s going to take as much as two months to do that layout,” Rush said. “We have to cure it every inch or so, and there’s a lot of logistics and handling, but it’s been a great project.”

Meanwhile, OceanGate has been putting another one of its submersibles, Cyclops 1, to profitable use. Last month, the OceanGate team took three citizen explorers — diving enthusiast Renata Rojas plus “Simpsons” TV comedy writer Mike Reiss and his wife, Denise — to the depths of the Hudson Canyon off New York’s shores.

By all accounts, the trio enjoyed seeing the sights 1,000 feet down. “It’s the lowest I’ve sunk since I wrote a ‘Charles in Charge’ episode in 1985,” Reiss tweeted.

Still more dives are planned starting next week, and this time the itinerary will include a visit to the wreck of the U-869, a Nazi German submarine that sank off the coast of New Jersey in 1945.

Rush is glad that Cyclops 1 is back in business, after months of social distancing. “A lot of this is just getting wet again,” he said. Once OceanGate finishes up what the company calls its “Wrecks of the Northeast Deep-Sea Expedition,” Cyclops is due to be put into storage for the winter at the University of Rhode Island.

In the months ahead, the focus will shift to Titan and its extreme makeover. The submersible is scheduled for pressure testing at the Deep Ocean Test Facility in Annapolis, Md., followed by shakedown cruises in Puget Sound during March and April. “Then it will go to the East Coast and dive in the Hudson Canyon to 4,000 meters, prior to going out to the Titanic in late May,” Rush said.

OceanGate has had to scale down its operations due to the financial stresses associated with the pandemic. “It’s been very difficult to get potential clients to talk about participating in anything, until the last two months or so,” Rush acknowledged. “Now people are starting to think about, ‘What am I going to do next summer?’”

Because of cutbacks and cancellations, additional spots on the Titanic trips have opened up for citizen explorers, also known as mission specialists. (OceanGate avoids calling them “tourists” because they’re considered part of the crew, with on-deck duties during the expedition.)

Up to nine mission specialists at a time will be transported to a support ship for each 10-day expedition. They’ll take turns, three at a time, diving down for a daylong trip to the Titanic’s 108-year-old shipwreck, in the company of a professional pilot and a researcher. And they’ll get in on a survey that will feed into a database of high-resolution imagery suitable for TV documentaries and virtual-reality experiences.

Six expeditions are planned, running from late May to July. The price of participation started out at a little more than $100,000 — the inflation-adjusted equivalent of the price for a first-class ticket on the Titanic in 1912 — but the fee has since gone up to $125,000.

RMS Titanic Inc., which holds the salvage rights for the shipwreck site, is planning its own expedition next June to cut into the ship and recover the Marconi wireless telegraph machine that sent out distress calls during the sinking.

“We’d like to be out there when they’re out there, and we’ve been in discussions with them to be able to be on site,” Rush said. “We certainly want to make sure we don’t interfere with their operations, but I think it will be a value-added relationship as we get closer.”

If all goes according to plan, next summer will mark the start of a series of annual expeditions to the Titanic, aimed at documenting the wreck’s accelerating disintegration.

In January, OceanGate announced that it raised $18.1 million in investment for the construction of two new submersibles — but Rush said the figure ended up coming closer to $16 million, due to financial reversals related to the pandemic. Because of the shortfall, OceanGate decided to start with the Titan overhaul and delay the construction of the second sub until next year.

By that time, Rush hopes the trips to the Titanic will make a big splash — in the ocean, and maybe on a screen near you.

“We’re thinking 2022 will be much more media-focused. There are some organizations we’re talking to about that,” Rush said. “One of the things that the media folks want is all kinds of additional lighting and flyaway robots. They have a long wish list, and I think by 2022, we can accommodate that wish list without placing undue stress on normal operations.”

Column: When the phone company and the robocall scammer are one and the same

Call of Duty: Black Ops Cold War will reportedly be released on 10 August