No-one really pays attention to air quality in the home, but with pet dander, allergens, bad odors, dust, and more filling our homes, there is a huge benefit to adopting an air purifier. The new VOCOlinc PureFlow has not only the title of the very first HomeKit air purifier, it is also a bargain and a healthy change.

Apple has supported air purifiers within HomeKit for quite some time, but no solutions entered the market until recently, leaving users with few options. We ourselves explored options including automating “dumb” air purifiers with an air quality sensor coupled with a smart plug, along with using HomeBridge to connect our Dyson air purifier and Xiaomi Mi air purifier.

But still, no real native HomeKit solution surfaced on the market.

During CES 2020, we got a look at the PureOne air purifier which is said to support HomeKit but that product still appears far from launch. After much radio silence on the HomeKit front, we saw the launch of the incredible VOCOlinc PureFlow VAP1, with HomeKit support baked in from the beginning.

Why do I need an air purifier?

An air purifier has historically been a hard sell, as people don’t often jump on solutions to problems if they can’t see the problem. As we can personally attest, the biggest selling point of an air purifier is the result afterward.

Once you see the debris captured in the filter, once you notice the lack of smell in the air, once you realize you can smell better, you fully appreciate the value.

I alone have installed three air purifiers, due to the bevy of animals that call my house their home and our placement just outside the city where we get both pollution and allergens. An air purifier is able to help keep these varying particles at bay.

VOCOlinc says the PureFlow is able to filter out debris down to 0.3 microns in size. That includes dust, mold pollen, allergens, smoke, bacteria, odors, and — of course — pet dander.

It manages this thanks to a dual-filter, three-stage design. There are filters on either side of the PureFlow that are housed behind removable magnetically-held doors that easily pull free when it is time to replace the filters contained within. When the doors are opened, the air purifier automatically turns off. 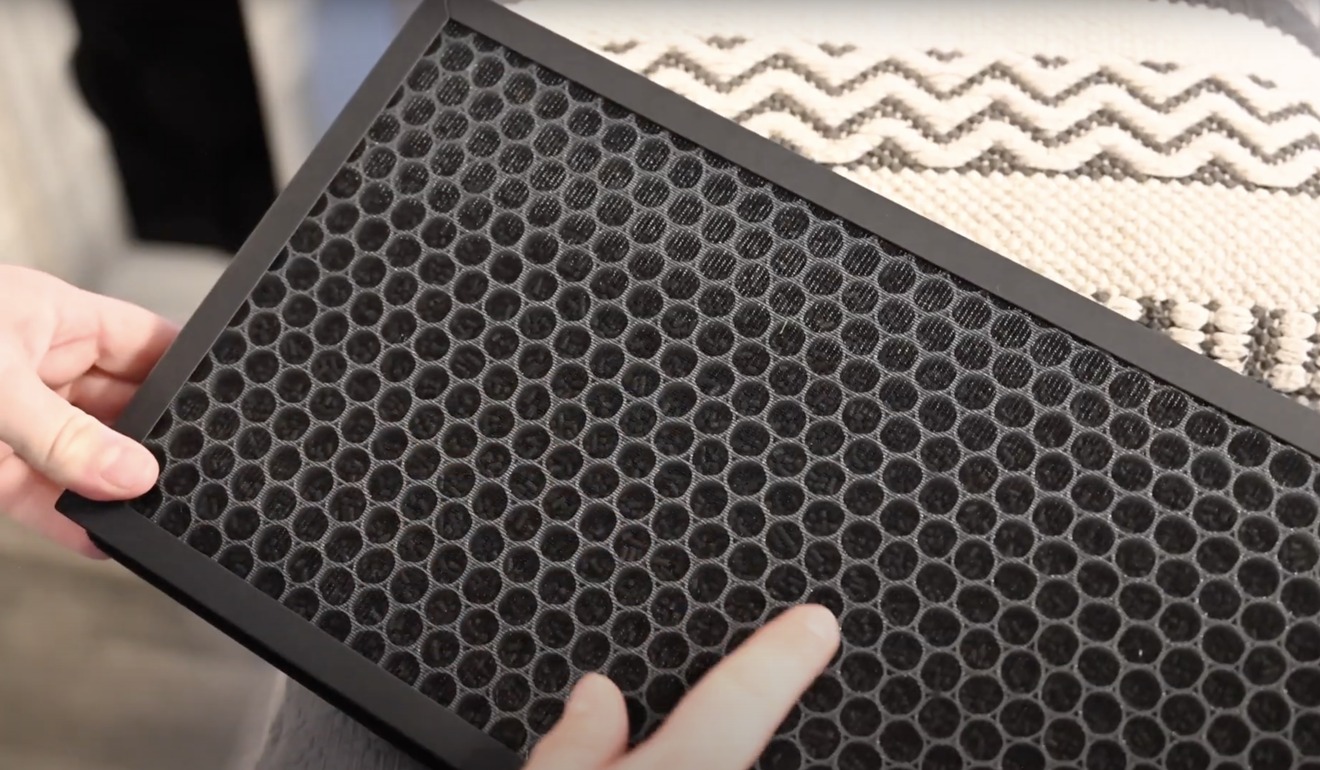 Each of these filters has three stages. The first, a pre-filter to stop larger debris, followed by a HEPA filter, then a layer of activated carbon. The HEPA filter takes out all of the smallest particulates and the carbon helps remove odors and scents.

Not long after running the filter, you’ll be able to remove the door and see how much debris has already been filtered out. A filter lasts for around six months before needing to be replaced for optimum performance.

Aside from measuring and improving the air quality, the PureFlow also includes a HomeKit thermometer and hygrometer to measure the temperature and humidity. 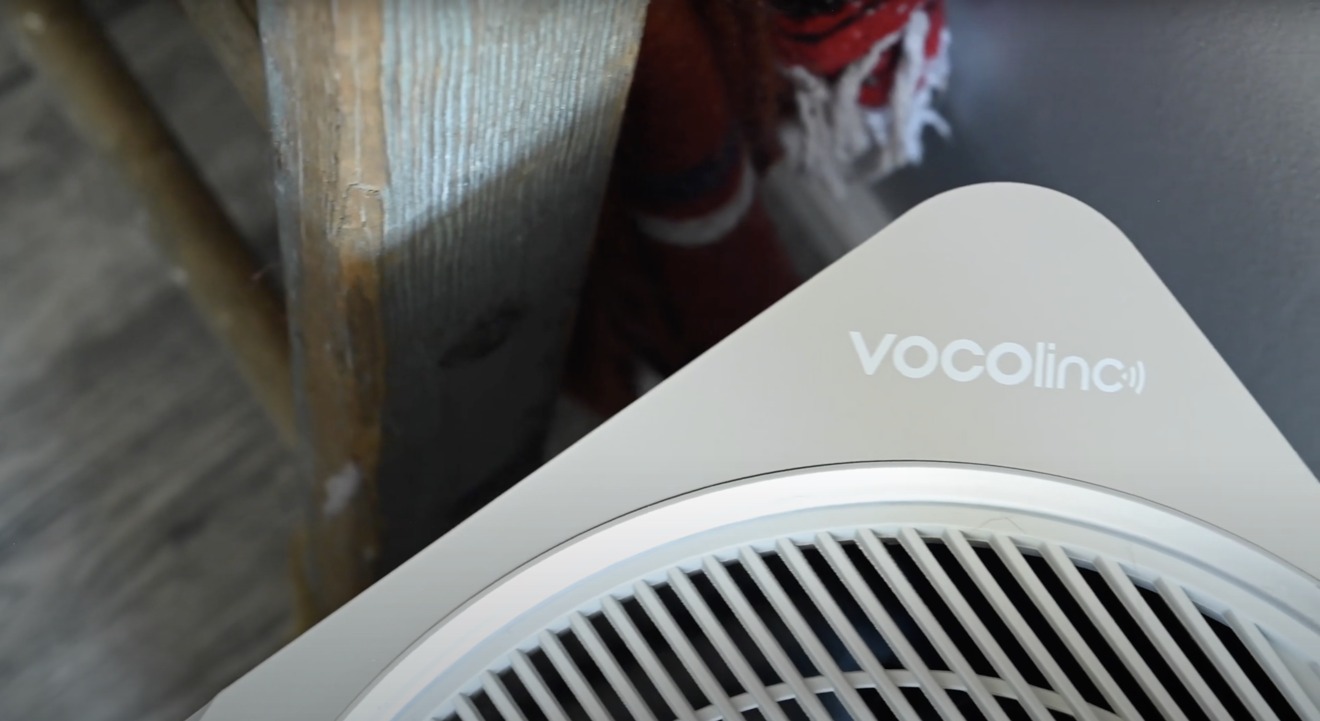 The VOCOlinc logo on the PureFlow air purifier

VOCOlinc’s air purifier looks sleek, though not all that dissimilar to other air purifiers on the market. Many, including the BlueAir 121 and the Xiaomi Mi air purifier, have a very similar aesthetic — that of a rounded square protruding upward.

The air is drawn in through the sides, the ones discussed above that hide the filters, and it is vented out of the top. A 3D wave pattern is also molded into the top which gives it a better look than those that are flat.

On the front of the device is a large OLED display that, at times, can be borderline obnoxious. The display is 5.1 inches on the diagonal and can be very bright, though fortunately, this can be dimmed. 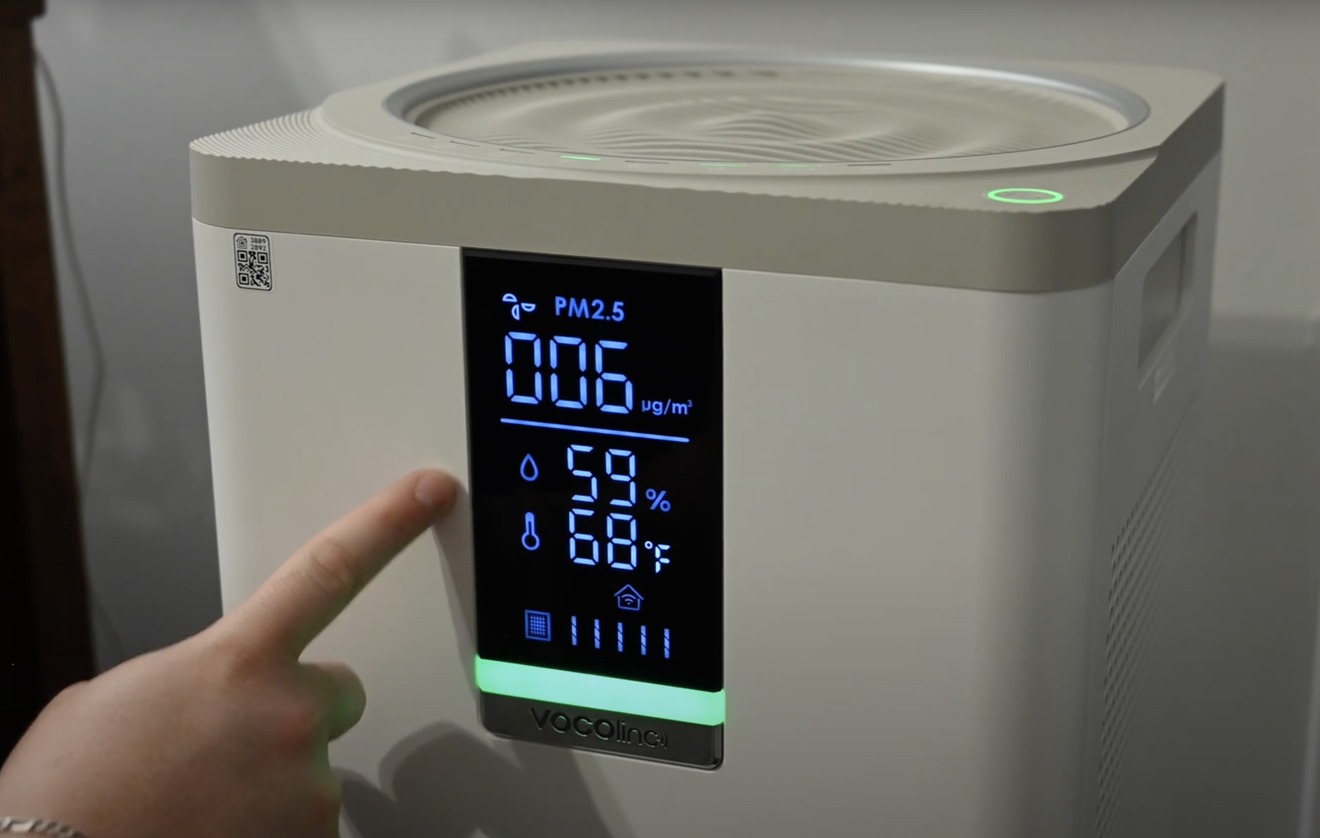 Closeup of the PureFlow display

Atop the display is your current air quality, as measured by the PM2.5 sensor. It gives you a numerical reading, but it is also displayed visually via the colored bar below the display, changing color based on the air quality in the room. 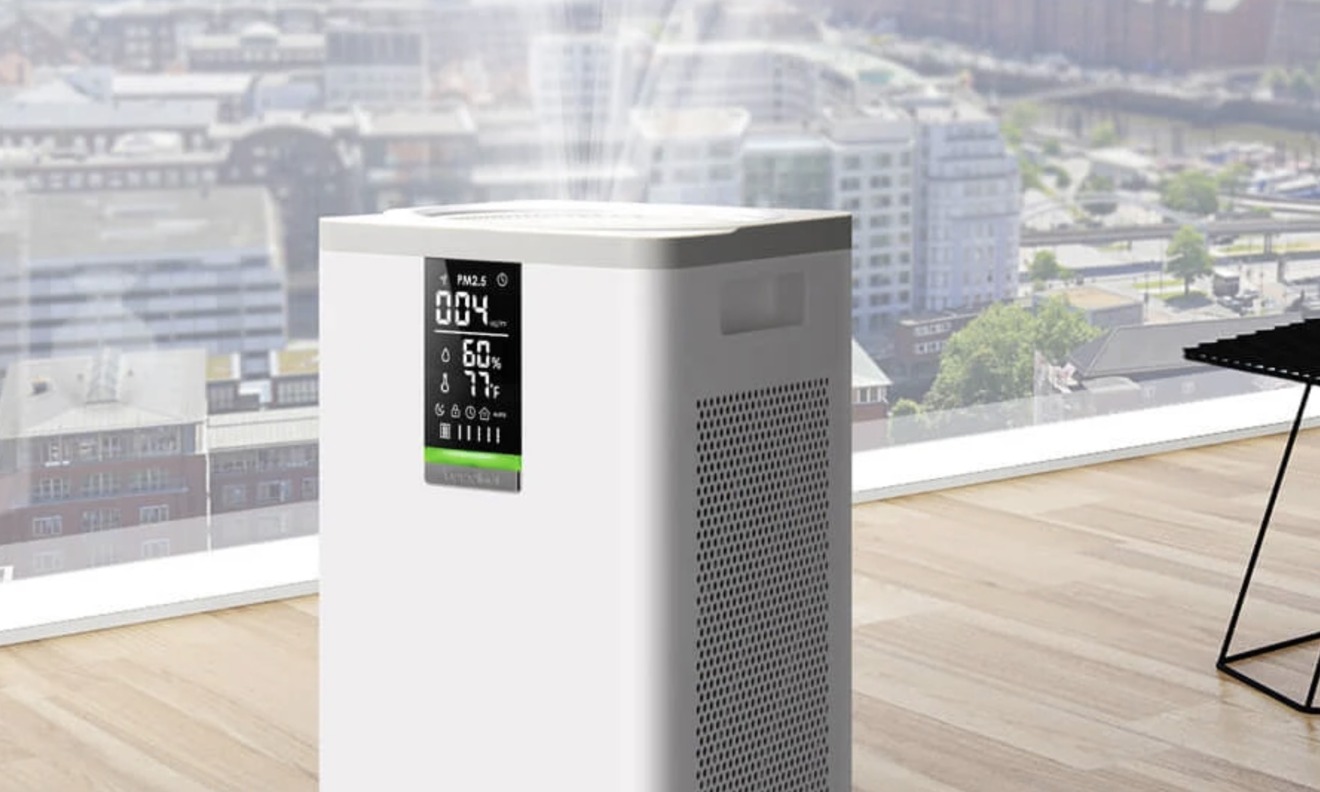 Below the air quality, there is the temperature, followed by the humidity. A row of icons lets you know the fan is on, if a sleep timer is active, if the child lock is enabled, if it connected to Wi-Fi, and whether or not it is in auto mode. The last information displayed is the health of the filter.

It is a lot of information, and for those who want data will appreciate the dense display. But, it can also be busy, and not everyone will appreciate it being lit up all the time. 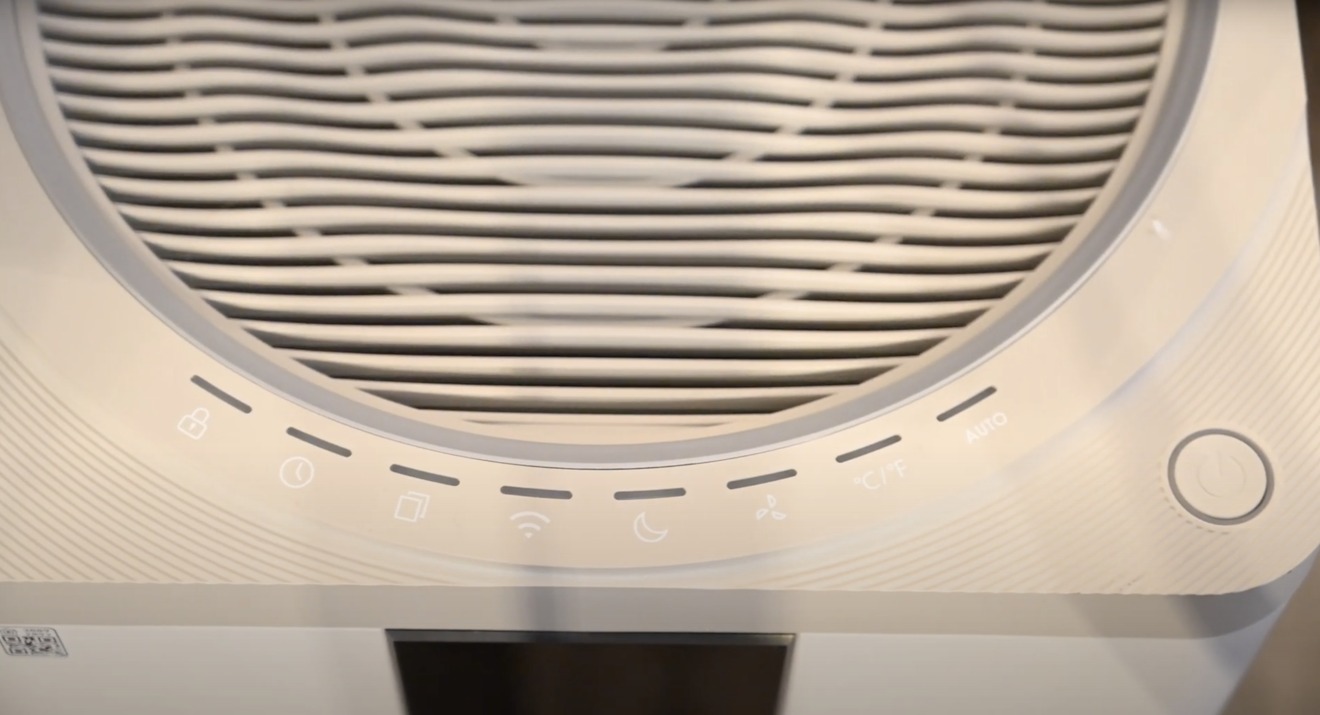 Icons and status lights on top of the VOCOlinc PureFlow

Finally, a set of touch-sensitive manual controls are on the top of the device, each lit up with its own vivid green light. 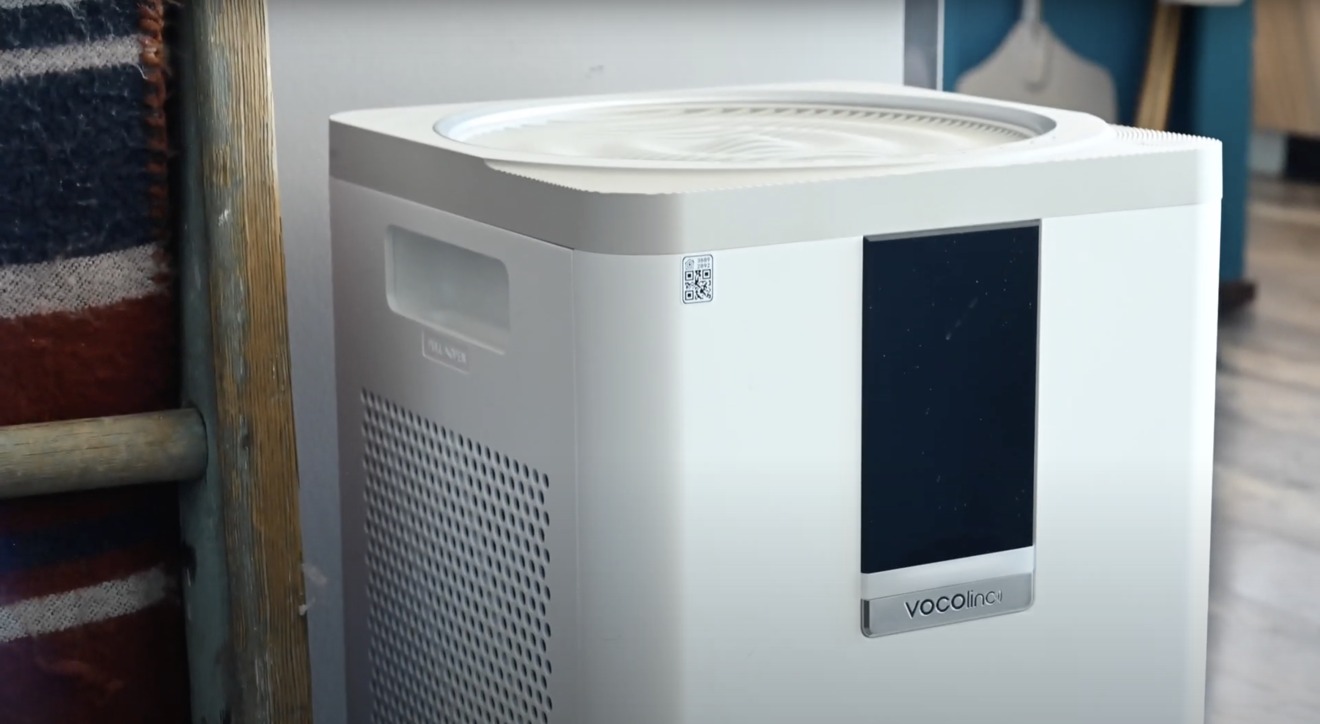 Some may consider the size of the VOCOlinc PureFlow large, but compared to others in the space it is on par, if not slightly smaller than the competition. Our BlueAir 121, which is only rated to clean a 620 square foot room, is certainly wider, and yet the PureFlow is rated for 645 square feet.

Benefits of a HomeKit air purifier 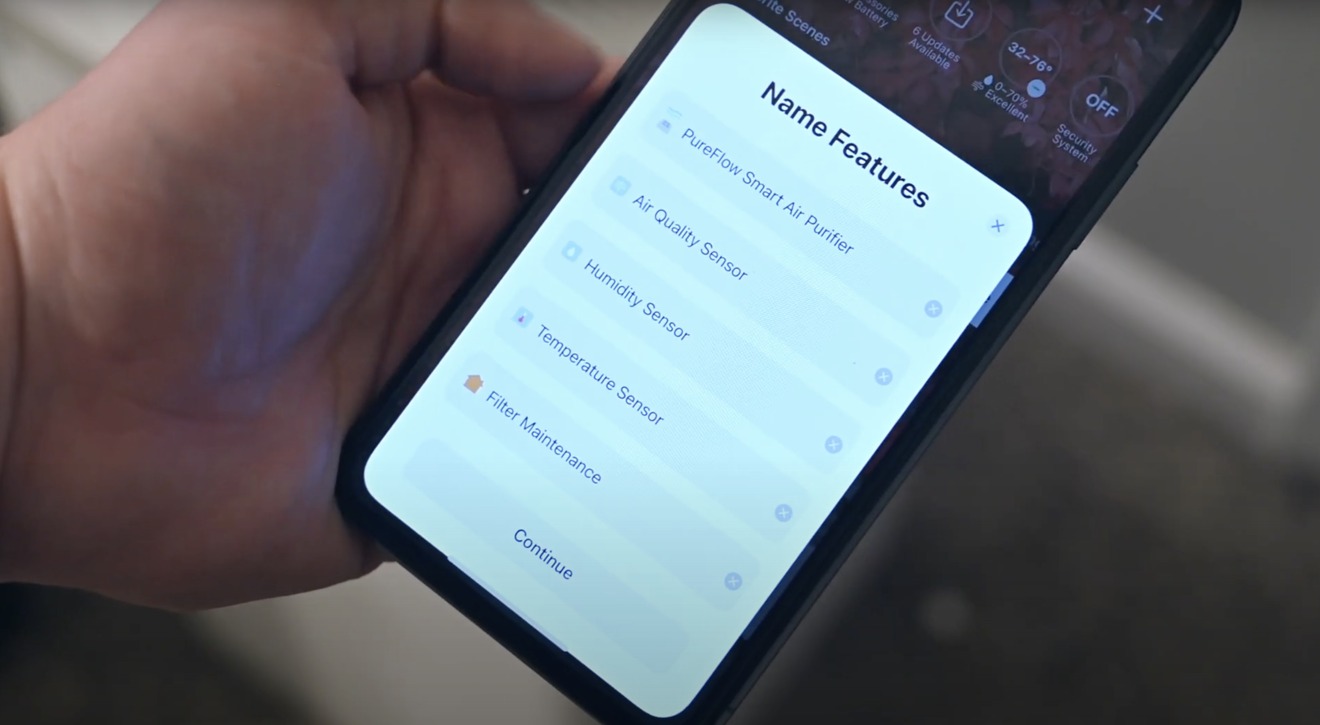 The air purifier can be set to ramp up to full speed whenever you leave for work during the day so you come home to an exceptionally clean home. Or perhaps you want it to turn on when the first person arrives home.

Maybe you’ll change the speed to low when you activate your “goodnight” scene. There’s also the ability to turn up the fan when a smoke detector detects smoke — perfect for near the kitchen.

Since there are additional sensors in the PureFlow, it can drive other scenes and automations. Perhaps turn on the ceiling fan when the temperature gets too hot, or turn on a humidifier or dehumidifier based on the humidity level.

The only downsides have to do with HomeKit itself. For example, you can’t enable the special “night mode” from the Home app or Siri. Night mode, which slows the fan to be near whisper-silent and almost entirely turns off the display, has to be controlled from the VOCOlinc app. 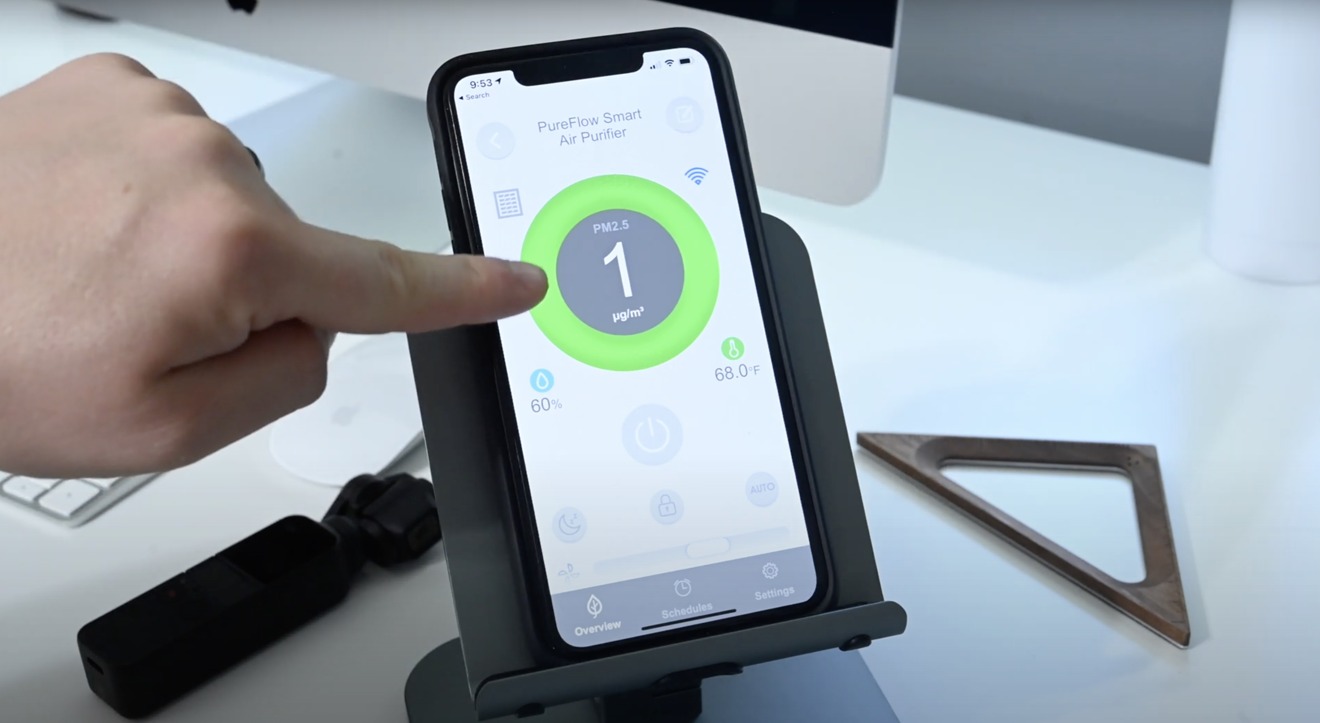 More controls in the VOCOlinc app 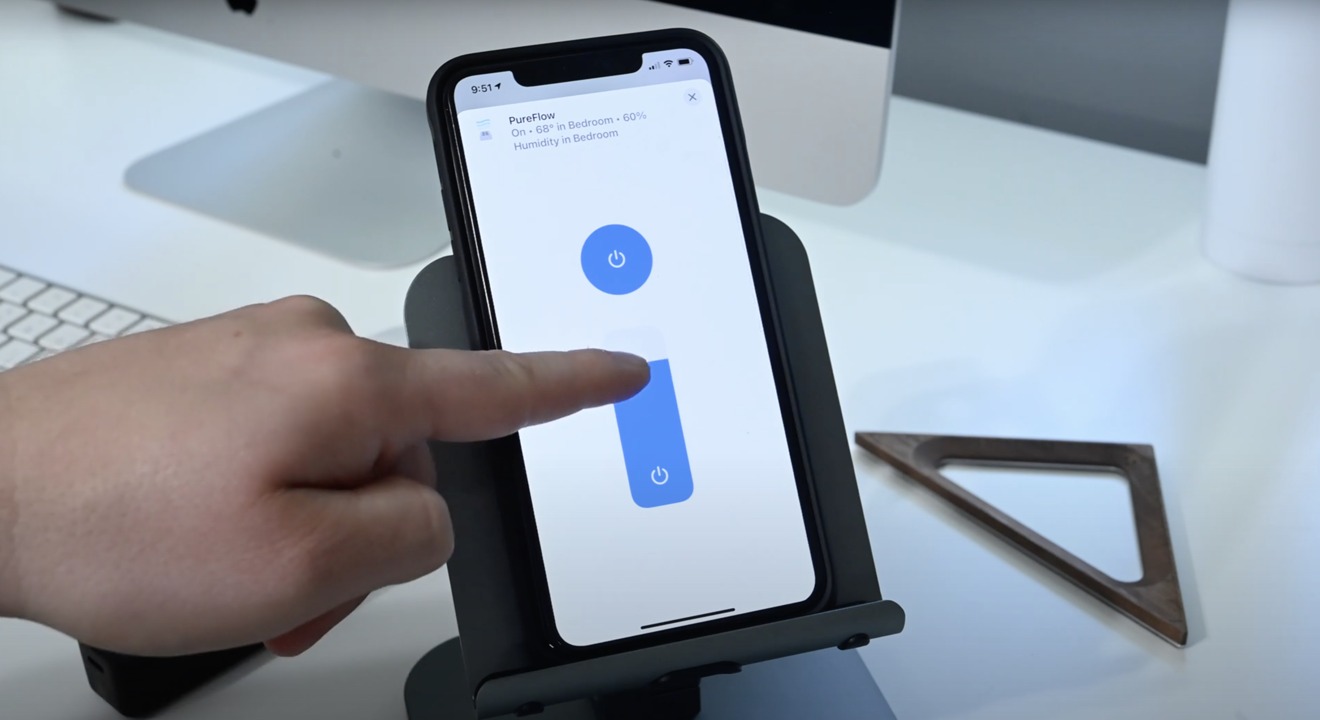 Adjusting the speed in the Home app

Another oddity that presents itself with the PureFlow that is helpful to know, is the way the fan changes speed. In the VOCOlinc app it shows as numbers one through five, but i8n reality, it is controlled by percentage.

Should you buy the VOCOlinc PureFlow VAP1 HomeKit air purifier?

HomeKit users, in particular, have been lining up for a HomeKit-capable model for some time and VOCOlinc has finally delivered. The Wi-Fi connected device always responds very quickly, has made a noticable improvement in the quality of our air, improved our sleep, and has allowed further HomeKit control.

It is also cheaper than other models — like the popular BlueAir 121 — while including smart capabilities, a display, and cleaning more air. 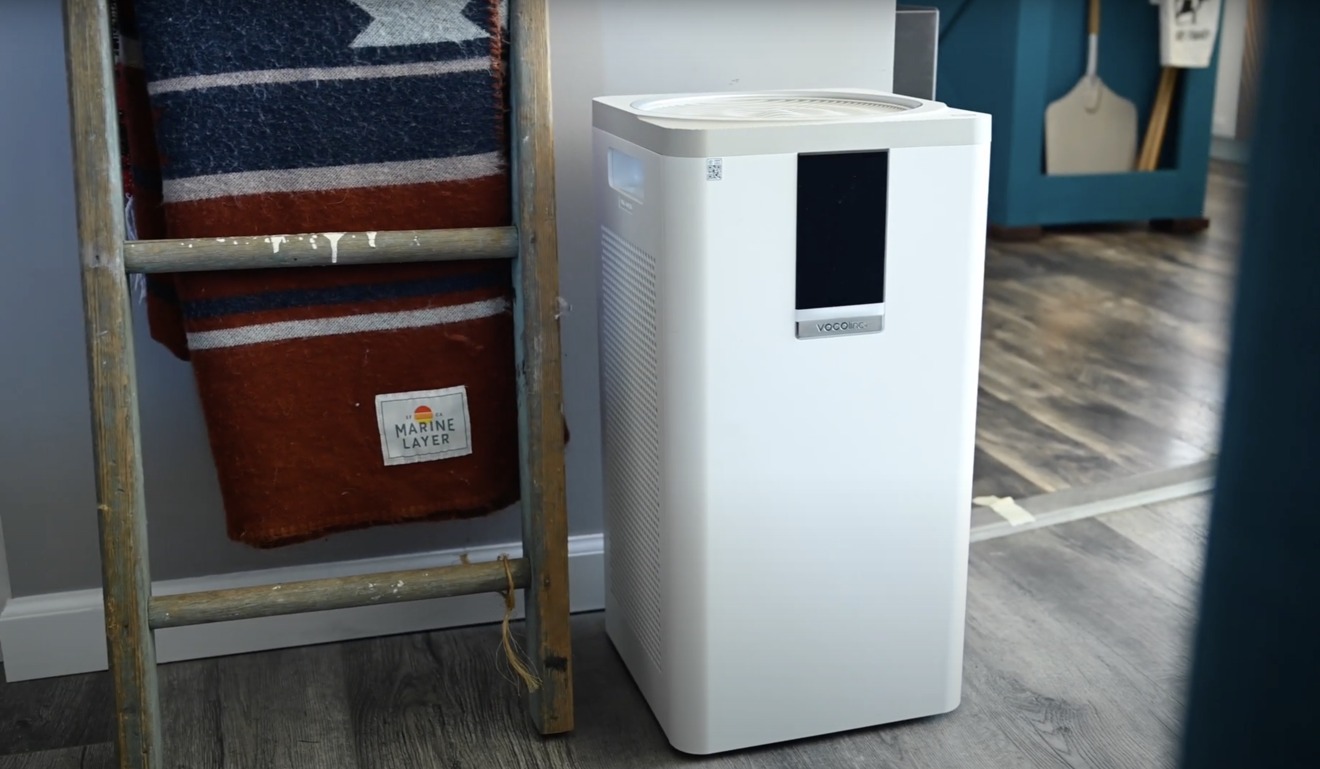 If you want to invest in the quality of your home’s air as well as your health, you can’t go wrong with the VOCOlinc PureFlow.

19th September 2020 noreply@blogger.com (Richard Byrne) 0
Free Technology For Teachers how to Most Popular Content most popular posts Teaching With Technology Week in Review

Google Pixel 5: Everything we know so far (Updated: Sept. 29)

"I would rather feel machine judging me, than people judging me" – Jeremy Morgan during AMA

CBS All Access will become Paramount+ early next year

Windows 10 quick tips: Get the most out of Cortana